Bailey Roche has committed herself to advocating for sexual assault survivors. She’s a survivor herself.

“When you hear someone who has gone through something that is so life-changing,” Roche said, “you are inspired to tell your story and realize that you are not alone.”

Roche, a member of the University of Wisconsin-Eau Claire’s Student Senate, helped organized the “It’s On Us” event on Wednesday, April 24.  It’s On Us is a movement across the country to raise awareness in the fight against sexual assault. 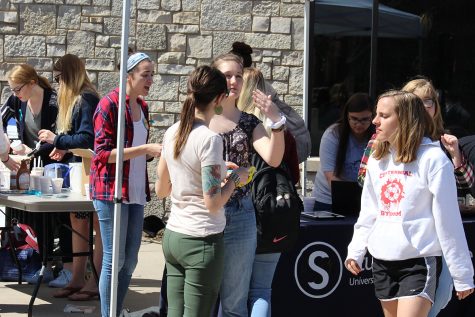 Student Senator’s Bailey Roche and Alexandra Kurtz spoke with students on Wednesday with students to inform them on resources on campus and asked them to pledge their support. © 2018 Travis Nyhus

Student Senate organized sexual assault resource groups together to let students know they can be part of the solution. These groups include the Center for Awareness of Sexual Assault (CASA) and the Student Advocates for Sexual Assault Survivors,

The event is part of sexual assault awareness month and Senate partnered with other resource groups on campus.

Alexandra Kurtz, the student life coordinator for Senate, said they hoped to make sure students know campus is working to combat the issue of sexual assault on college campuses.

The conversation needs to continue even after the It’s On Us event, Roche said, one event isn’t enough to generate change.

“We need to keep this conversation going throughout the whole year, even outside of college and spread it from the university to the communities,” Roche said, “and have students take that to their communities, so that this message gets spread globally, rather than having one event done and over with.”

It’s important for Senate to organize an event like It’s On Us because of the role the group plays as leaders for students.

CASA provides counseling, support groups and advocates for survivors, but Kurtz said CASA can’t do awareness outreach, so students have to fill that role.

Survivors need to know there are people who want to support them, Roche said. It allows survivors to take back control over their lives.

“I know that for a couple months I felt very alone in a situation where I knew I was not alone,” Roche said. “It wasn’t until I started hearing people tell their story that I felt empowered and I had control over my life again. I was going to be okay and it wasn’t my fault.”

There’s a societal habit of blaming the victims, she said, but awareness can educate people about what sexual assault is.

“I feel this is a topic that is very prevalent in our society that we don’t talk about and do a lot of shaming of survivors, which is something that should never occur,” Roche said. “We need to be there for people who go through these horrendous acts.”

Both Kurtz and Roche commend what the university has done to address the issue. Kurtz mentioned the Stand Up Bystander Intervention Program from the Dean of Students Office. Stand Up encourages and advises students how to be active bystanders in the harassment and microaggression.  The university system recently made sexual assault training mandatory for students and staff.

“We can help connect you to people at Student Health Services who will help you take your next steps after an incident of sexual assault,” Van Steenburgh said.

SWAT provides medical and health resources for students, including help with mental health and alcohol and other drug use.

Fixing a lingering problem on college campuses isn’t done in a day, Roche said. Student Senate will form an “It’s On Us” committee to continue the conversation.

“We can’t just think this is enough,” Roche said, “because it’s never enough, until the problem is eradicated.”

One Response to “UW-Eau Claire students organizing against sexual assault”