“Someday I’m going to hit it as far as Tiger (Woods),” said 12-year-old Casey Anderson  as he stepped to the tee at Wild Ridge Country Club.

He’s been golfing with his father, Mark Anderson for the past nine years.

“Ever since Casey started walking he came with me to the golf course,” Anderson said. 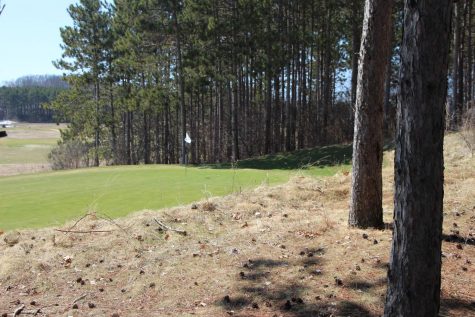 The Chippewa Falls family used to live in Florida, and one of the reasons that drew them to the area were the golfing opportunities.

“I really liked the fact that many courses around here focus on not just the primary members but the whole family,” Anderson said.

“We have been trying to give the younger members a little bit of a break,” said Mike Greer, the Country Club’s professional.

The Country Club gained golfers in their late 20s with the new lower rates, he said.

Also new this year is the Eau Claire Country Club’s involvement in the PGA Jr. League, a program that allows golfers to compete on two-person teams against players from other courses. The club’s junior program meets every Friday in the summer. With each week focusing on a different aspect of golf, Greer said, who lead youth and adult golf instructions.

“The Jr. League is modeled off a more classic youth league,” Greer said. “It’s like a little league team where there’s a group of 12 kids, and we compete in matches throughout the state.”

Greer owns and operates the golf shop at the course and on top of his duties as club pro, his job is year round.

“We’re hoping to add lights to our range this summer,” Robinson said. “I will give it a Top Golf feel, because we’ll have our bar and grill open for guests as well.”

Top Golf driving ranges are popular in major cities. They target a college-age demographic with multi-level hitting areas and a full-service bar at each location. Top Golf plans to open an additional 11 locations this year in the United States, according to its website.

“We are here to support the junior golfers and are happy that they are golfing at our course,” Robinson said. “It’s the least we can do.”

Robinson said the conditions of the course are on par with private clubs.

“Currently we offer some of the lowest rates in the area,” Robinson said. “We really are trying to create a country-club type feel around the course, even though we are only nine holes.”

Anderson, Casey’s father, said he plans to register his son for a junior league this summer, but has yet to decide on what course they will play at.

“I want to talk with some of the parents of Casey’s friends,” Anderson said. “Hopefully we can get a group of guys together, so they can hang out on the course.”

The Wisconsin PGA Jr. League takes place from May to July, with post season play running from August thru November. In 2017, 76 different courses in Wisconsin participated in the league.