The Eau Claire Cavaliers are remembering their former coach and manager 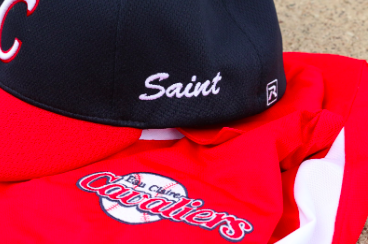 Glenn St. Arnault’s home away from home was Carson Park. You could find him there cheering on any baseball game there was.

Glenn St. Arnault, who was better known by his nickname, “The Saint,” has been a pioneer in the Eau Claire Cavaliers baseball team for most of his life. After 49 years of managing, coaching and cheering on many different generations of baseball players, St. Arnault passed away last May.

The current board of members and team knew they wanted to commemorate the player and coach St. Arnault once was and will always be remembered as. To do this, the Cavaliers have just unveiled their new hats in memorial of St. Arnault. These new baseball hats have his name stitched into the side and can be bought at the merchandise stands at Carson Park when the Eau Claire Cavaliers are playing a home game.

Max Sires, a former Cavaliers player, has been away from the team for two years but still recalls the vivid memories of St. Arnault.

“I can’t recall a game at Carson Park where I couldn’t hear Saint’s words of wisdom cutting through the chatter of fans,” Sires said.

Many players say he was known for his loud cheers and joyful presence at Carson Park, “The Saint” cared for and loved each player on the team over the years.

Tom Mewhorter, a fifth year player for the Cavaliers, has noticed how different the stadium is without St. Arnault.

“We used to talk before most home games, just about anything,” Meworther said of St. Arnault. “Maybe five minutes, but it was nearly every game. He was always the loudest guy at the park, cheering everyone on. It for sure is a quieter place with him not around.”

According to his wife, Judy, St. Arnault got his start in baseball by playing sandlot ball in the Eau Claire area and then moved on to coaching, but played whenever he had the chance.

“Saint kept baseball alive in the Chippewa Valley, and stayed with it all the way to his passing,” Sires said. “He’s been a staple of baseball in the Eau Claire community for a very long time. …  I don’t believe I’ve ever met anyone who loves the game of baseball, especially Cavaliers baseball, as much as Saint did.”

Mewhorter agreed that St. Arnault was not a person who would be easily forgotten.

“I think he just meant so much to so many people in the area,” Meworther said. “When you’re a good, friendly person who goes out of their way to talk to you and support an organization like the Cavs, people remember you.”

According to The Historical Marker Database, Eau Claire has a rich baseball history with the Eau Claire Bears starting as early as 1933 and Carson Park housing famous players such as Hank Aaron and Bob Uecker.

Sires credits St. Arnault with carrying on that rich history and tradition in Eau Claire.

“Baseball has always been a sport that thrives on nostalgia, it simply shouldn’t be as popular today as it is,” Sires said. “It’s slow, it’s chess with bats, but there is something special about sitting in the bleachers on a warm summer night and watching a baseball game. Because of how important tradition is in baseball, honoring those who were there before you is arguably more important than any other sport.”

The current board members that help manage the Cavaliers knew what they had to do. Without hesitation, they all as a team started to think of ideas to commemorate “The Saint.”

Nicole Branigan, the current president of the board for the team, said it was an unwritten decision they knew had to happen.

“I don’t think specifically it was anyone’s sole idea,” Branigan said. “As a group, we thought that because Glenn was such a great influence to not only the found of the Cavaliers, but the coaching, recruitment, and continued growth of the organization, it was a no brainer.”

Mewhorter thinks the idea of having his name on a hat was the right decision to make.

“The hats just felt like the right thing to do,” Mewhorter said. “To have his name there is just a reminder to have fun and enjoy the game. He started the Cavs and was a part of them for nearly 50 years. He is the Cavs. It’s only right to have his name on the hat.”

The board members wanted to unveil the surprise to St. Arnault’s wife, Judy. Something that would stand out and show how appreciative they were of both Glenn and Judy’s hard work and long running dedication to the team.

“It was a total surprise and I know Glenn would be so honored and humbled to think the team respected and though that much of him,” Judy St. Arnault said. “I am deeply touched.”