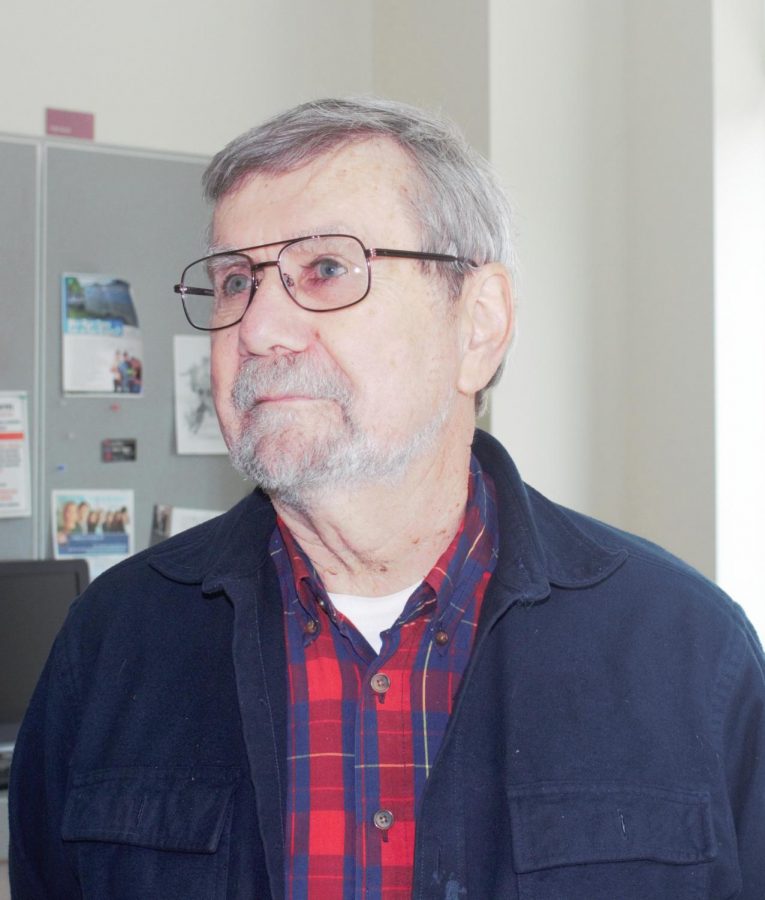 There is the sound of a ballpoint pen being drawn across a piece of notebook paper in the library, scribbling extensive notes gathered from the growing pile of newspapers on a desk. The room hums with whispered conversations. The smell of old newsprint permeates the workspace in the library, mixing with the scent of fresh brewed coffee.

“An author can’t do anything in the morning without having a cup of coffee first,” Brian Blakely, a local author and historian, said.

Blakeley is currently working on writing a three-part series focusing on the history of Eau Claire, starting from the town’s beginning and working his way toward the present. He spends his time researching in different places, like the University of Wisconsin Eau Claire library and Chippewa Valley Museum, Blakeley said, but he always takes notes by hand.

Blakeley received his doctorate degree in British History from Duke University in North Carolina, but before all that he was a part of the first class to graduate from Memorial High School. His wife, Mary, was in the year below him. Just after finishing high school, Blakeley enrolled at the Eau Claire State College, which is now known as the University of Wisconsin-Eau Claire.

The two moved to Texas where he taught at Texas Tech University for 35 years, and, in doing so, gained an appreciation for writing, Blakely said.

“We were expected to write,” Blakeley said, “it was part of our job.”

While working for Texas Tech University, he wrote about the history of the British colonial offices, and also co-wrote a book with one of his colleagues called “Documents of English History,” which was in print for 30 years. As well as his books, he had published countless articles, Blakeley said.

Once he retired, Blakeley and his wife moved back to Eau Claire and kept busy by hiking, walking, reading and tending their tree farm, which Blakely inherited from his parents. They joined a logger society, and about eight years ago attempted to hike the Appalachian trail. They were both 70 at the time but had to turn back after Brian Blakeley’s knee gave out. This has not stopped them from having daily walks around the neighborhood.

However, Blakeley could not shake the urge to write.

With the help of his wife, Blakeley wrote his first book after retirement about their families and how they got to where both families reside today. He called it, “Ordinary People: A Study of Our Blakeley and Mierow Ancestors in America.”

The book starts with the Blakeley family arriving in Connecticut in 1635, and Mary Blakeley’s family landing around New York in the 1840s.

After that, he moved on to a more ambitious project — recording the history of Eau Claire in a three part series. The first book starts in the logging era, and ends at the beginning of the industrial revolution where the second book picks up. The second book, which Blakeley hopes will be out this coming fall, will focus on the time between the industrial revolution and both world wars, ending in the 1950s. The third book will pick up from the 1950s onward and end by taking a look at Eau Claire today.

Most of his sources, especially for the contemporary events he studies for the books, come from newspapers and microfilms he finds at the public and university libraries, Blakeley said.

While Brian Blakeley writes and researches, Mary Blakeley supports him in her own way, she said.

“I go with him to the library quite often,” Mary Blakeley said. “I am his editor, proofreader, and moral support.”

It is why he has chosen to write about the history of Eau Claire specifically, he said.

Blakeley said he hopes the second volume of the history series will be out in September, while the third is already underway. They do not have a rigid daily schedule, but Blakeley knows he would like to finish the series, he said.

Blakeley’s books can be found at the Local Store for purchase.