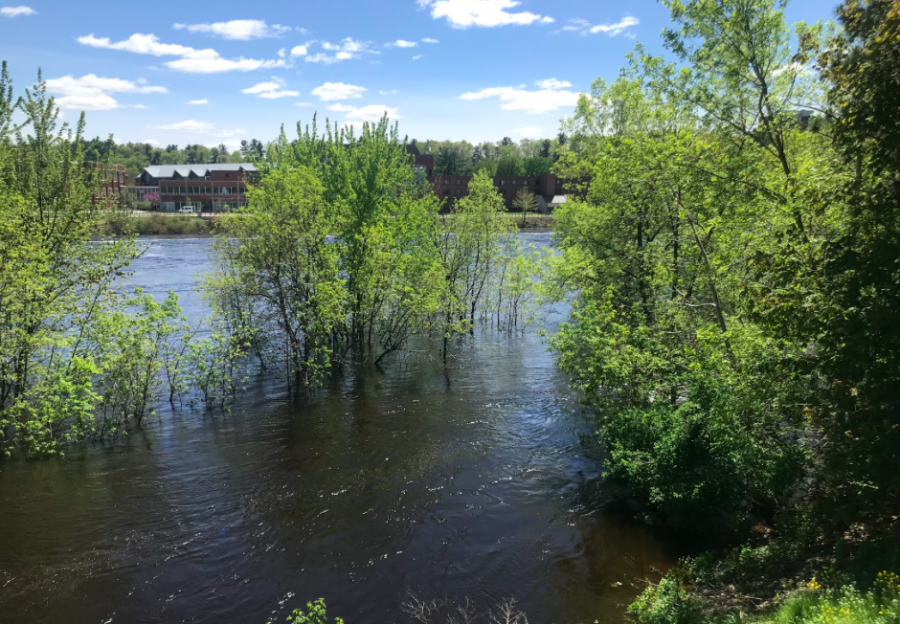 Flooding can become an economic burden to individuals as well as municipalities and state governments, said James Boulter, associate professor of chemistry at UW–Eau Claire in the Watershed Institute for Collaborative Environmental Studies.

The declining lake trends ice are one way to show Wisconsin residents the different influences and economic effects climate change can have on a community, said John Magnuson, aquatic ecologist and emeritus director of the Center for Limnology at the University of Wisconsin–Madison.

“We are losing winter as we knew it,” Magnuson said. “We are degrading our sense of place.”

In 10 years, the heating imbalance caused by greenhouse gasses will begin to overcome the oceans’ thermal inertia and projected carbon dioxide emissions will likely lead to several additional degrees of warming, according to the National Oceanic and Atmospheric Administration. A warmer climate would affect various elements of Wisconsin’s culture, including winter tourism, agriculture and forestry.

Magnuson is a co-author to a study published in late January that estimates the loss of winter ice cover to lakes in the Northern Hemisphere as the Earth’s climate warms. The study by Magnuson and other international researchers shows that the average duration of ice on Wisconsin’s Lake Mendota has decreased by about one month since the middle of the 19th century. The lake’s freeze date is getting later, and the breakup date is getting earlier.

Loss of ice cover can be an economical detriment to many Wisconsin communities that depend on winter tourism, Magnuson said.

“If a community has a thousand fishers come into the community to go ice fishing in a tournament, and then the week before it’s not safe enough to be on and it has to be cancelled, that has an economic effect,” Magnuson said. “It has an influence on the community’s well-being.”

Fishing could also be affected by a change in fish communities due to warmer Wisconsin lakes and streams. Walleye populations in many Wisconsin lakes are already in decline as walleye reproduce more successfully in cooler water, according to the United States Geological Survey.

Expected climatic changes in air temperature may also threaten Wisconsin inland trout, according to The Wisconsin Initiative on Climate Change Impacts. WICCI states that under the worst-case climate change scenario, brook trout are predicted to disappear from Wisconsin streams with populations of brown trout reduced in distribution by 88 percent.

“More southerly ice covered lakes are increasingly missing a winter of ice cover,” Magnuson said. “Given the expectations of future warming, these trends should continue.”

According to an interactive online mapping tool developed by researchers at the University of Maryland and North Carolina State University, assuming high emissions, Eau Claire’s climate will feel like Kansas City, Missouri in sixty years, with a typical summer in Kansas City 7.2 degrees warmer and 8.9 percent wetter than in Eau Claire.

“My daughter likes to go cross country skiing and things like that… Nobody cross country skis in Kansas City,” said Scott Clark, associate professor of geology at the University of Wisconsin–Eau Claire. “It will be completely different.”

Not only will the average temperature get warmer, but the number of really hot days will increase substantially, said James Boulter, associate professor of chemistry at UW–Eau Claire in the Watershed Institute for Collaborative Environmental Studies.

“We’ll see more and more heat deaths and we’ll see worsening air quality in urban areas,” Boulter said. “The increased extreme hot days could affect us here in Eau Claire, but especially in big cities where you get what’s called the ‘urban heat island effect.’ All the heat really concentrates in the cities. A lot of the elderly and maybe even some of the really young may be affected by it.”

“When the atmosphere can be that saturated with that much water, when it releases it it’s substantial,” he said. “So that leads to the flooding issues we’ve seen in the south of the state.”

Flooding can become an economic burden to individuals as well as municipalities and state governments, Boulter said.

“It destroys infrastructure, roads in particular but sometimes bridges as well,”Boulter said. “It also destroys people’s homes, their business, their croplands, their livestock even in some cases.”

In addition to flooding, Wisconsin agriculture is expected to be impacted by a warmer climate with longer frost-free periods and changes in crop yields, dairy productivity and pest infestations, according to WICCI.

A change in pest infestations may also begin having an effect on Wisconsin forestry.

Other tree species residing in Wisconsin that may go locally extinct with warmer temperatures include the red pine, paper birch and balsam fir, according to the WICCI Forestry Working Group.

“It’s not quite as dramatic as sea level rise and the tragic wildfires and hurricanes of the southeast and far west,” Boulter said. “But it’s measurable.”