Chance lead a martial arts teacher to her new lifestyle 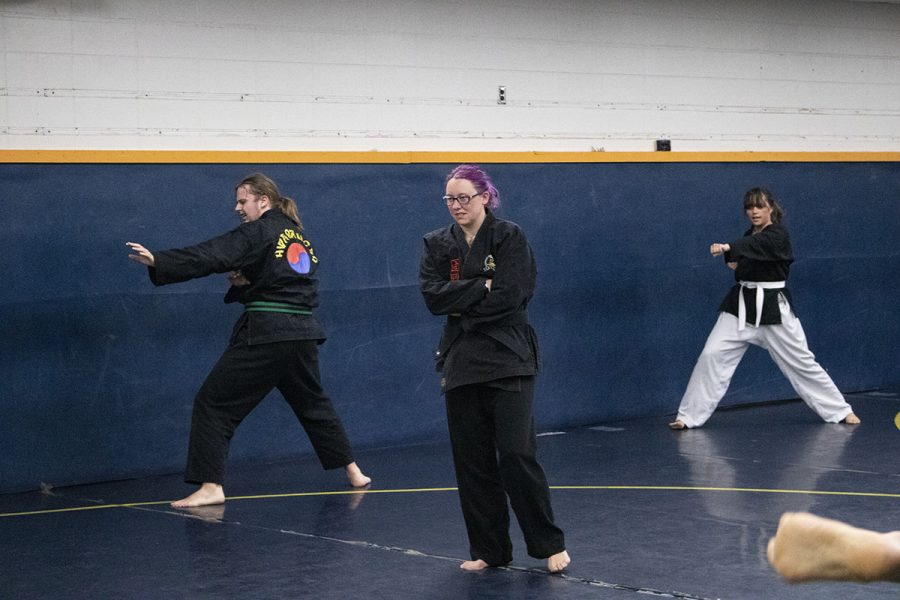 Beth Teutschmann is the head instructor for the hwa rang do/tae soo do club at UW-Eau Claire. © Lauren Spierings 2019

Beth Teutschmann stumbled on martial arts on a whim. But, she said, becoming part of the Martial Arts club on campus was something of an obvious choice once it was open to her.

Through walking up to a random stand at a university event as a first-year student in 2005, known as Blu’s Organizations Bash at the University of Wisconsin-Eau Claire, Teutschmann discovered a lifelong dedication and lifestyle that she still sticks with today.

In fact, she teaches it as a head instructor at UW-Eau Claire’s hwa rang do/tae soo do club.

According to Aaron Nelson — an assistant instructor for the hwa rang do/tae soo do sports club — hwa rang do is a Korean martial art that was split into two “levels” of skill after it was brought to and practiced in the United States. Tae soo do became the first level, with hwa rang do being the second level.

“I grew up watching like the Ninja Turtles and Power Rangers and stuff,” Teutschmann said. “So, I had to check it out and that was 14 years ago. So, it stuck from there.”

Teutschmann became the head instructor for the first time this year, due to the past instructor — Erik Heacox — deploying to the Ukraine.

After graduating, Teutschmann said she went through a few time periods of being involved with the club and other times of hiatuses. When Heacox deployed, Teutschmann was chosen to become the head instructor due to her senior experience.

“It’s different being a head instructor, where you’re in charge of deciding who’s learning what and when, and scheduling and all that kind of stuff,” Teutschmann said.

Tetuschmann is joined by three assistant instructors, Nelson, Nicklaus Zienbein and Jared Day, making her the only female instructor.

Since those learning martial arts are learning how to do potentially dangerous things, this necessitates such a system, Teutschmann said.

“I mean, she’s plenty tough either way,” Nelson said. “So I don’t know what would make her that different from a male instructor. I mean, she seems pretty much the same to me.”

Teutschmann, having been around the club for 14 years, has almost double “if not almost 50 percent” more time invested in hwa rang do and tae soo do than other members who have repeatedly been involved.

According to Teutschmann, most of those in the club and those who associate with it have been around for only a few years, with her estimate of the nearest one with experience being seven to 10 years of experience.

Because of this range in experience, Teutschmann said, her own instructors — who outrank Teutschmann herself — said that she was the best candidate to fill the position.

The decision to teach martial arts to others was, according to Teutscshmann, not even an option. She said that teaching martial arts was something that was just expected.

“It’s extremely selfish to take all of that experience and say, ‘No, I’m not going to then turn around and perpetuate the cycle with the next generation,’” Teutschmann said. “That’s kind of a d— move.”

Doing martial arts has had both practical benefits and more hidden benefits than one may suspect. For Teutschmann, the physicality has led her to think on things that most people won’t on a day-to-day basis.

Reiterating the dangerous methods being taught, Teutschmann said she felt that the dedication of learning how to not only “down” someone but also “kill down” a person for 14 years is why martial arts is so important to her.

Besides the physical methods of hwa rang do and tae soo do, martial arts have also helped Teutschmann with how she comes at and deals with life

Sometimes, it’s a challenge. But, she said, that challenge is what makes it enjoyable. It’s about realizing that you’re so much greater than you initially may have considered.

“I would have nothing in my life that I have right now if it wasn’t for the things that I learned through training,” Teutschmann said.