One farmer balances running a business, while also being a family man. 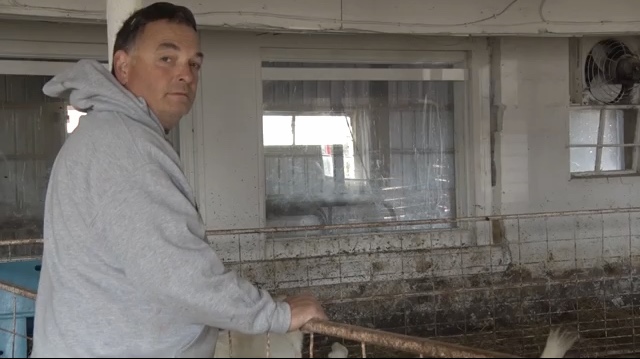 John Govin is the owner of Govin's Meats and Berries in Menomonie, Wisconsin. Govin says his goats are getting fed and prepped before being sold to market. ©Carly Swisher 2019

Clumps of hay stick to his clothes and dirt covers his hands, while he moves rapidly from one chore to another. John Govin the co-owner of Govin’s Meats and Berries in Menomonie, Wisconsin has always known farming is in his blood.

“Our homestead was founded in 1854 and I was born into it,” Govin said.

John Govin grew up on a farm, nearly two miles from where he now lives alongside his wife Julie. With about five generations under the farm’s belt, Govin knew he had to continue the legacy. He has for 30 years.

In 1963, John Govin was born on his family dairy farm. After starting a family with Julie Govin, they decided to leave the stressful dairy industry.

”There was a phase when I quit milking cows because I never saw my kids,” John Govin said. “I’d be in the barn and they’d be ready for bed by the time I came in at night.”

John Govin says the cows always come first when running a dairy farm. There were times when he’d miss out on holidays because the cows needed attention twice a day, seven days a week. During this time, the Govin’s sons were 7-years-old and 9-years-old when the family developed their farm into a strawberry business after selling the cows. John Govin says he doesn’t regret raising his children on a farm one bit.

”They both had livestock from the time they were little kids,” John Govin said. “They were always part of the farm. The income from the animals that they owned went directly to them.”

After growing up with a family farm dynamic, the Govin’s oldest son decided to carry on the tradition. Kyle Govin now owns a farm down the road from his parents. Kyle Govin says his dad always worked hard to be both a father and a farmer.

“He always strived to make time for his family even during the busy farming seasons, allowing his children to work alongside him,” Kyle Govin said.

John Govin’s kids were born into the agriculture life, but his wife, Julie Govin didn’t plan to be a farmer. It was at the Minnesota State Fair when Julie and John Govin met. He was showing his cows, and quickly, Julie Govin found her place in the farming way of life.

“He was a farmer and it was not something I was looking into,” Julie Govin said. “I knew nothing, but when we got married there wasn’t anything I couldn’t do on the farm.”

Shortly after having kids with John, Julie Govin realized that certain things like family trips weren’t going to be quite like her childhood experience.

“It was always farm-related if we went somewhere, but that was our vacation,” Julie Govin said.

Julie Govin says the kids and her didn’t feel like they were making sacrifices to accommodate John Govin while he was busy farming, they learned how to adjust to it.

“A picnic to us, well he’d be bailing hay somewhere and we’d bring a picnic to the field,” she said.

Although John Govin can be busy on the farm all day, while Julie Govin goes to her daytime job, she says he is constantly caring and supportive.

“Today I came home and the dishes were done,” Julie Govin said. “It’s the little things and it goes a long ways.”

John Govin says the first 10 years when they were married on the farm together, he was mainly the farmer. But, John Govin says throughout the years it has turned into a team effort that has made them equal co-owners.

“I get to farm and she gets to do the tourism side of it, so we compliment each other a lot,” John Govin said.

Amanda Bohl is a longtime friend who has worked on the family’s farm. Bohl says that John Govin has always remained open-minded and honest even when he faces different challenges.

“He often talked candidly about the realities of farming,” Bohl said. “The pressures that come with all of the expectations of being a successful farmer and raising a family with Julie.”

The first 10 years of balancing his marriage and family had its ups and downs, according to John Govin, but the last 20 years made it worth it. John Govin says he’s not sure when they will retire from working on the farm, but when they do, he wants to spend it with his wife enjoying the fruits of their labor.