A creative designer lives his dream 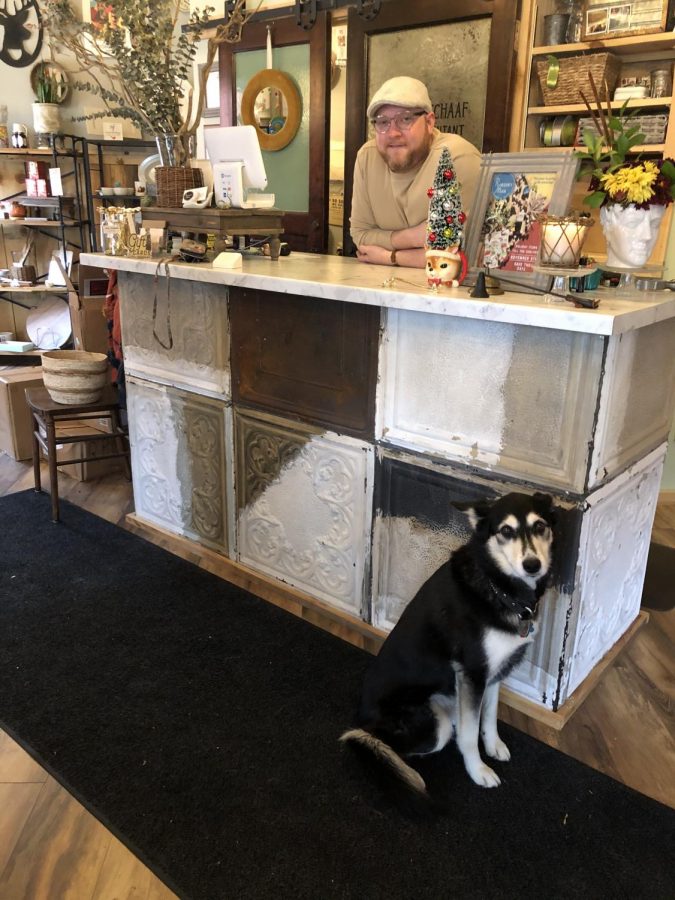 Behind the counter is Matt Pabich, Kaya’s owner and the brains behind the gift shop at 401 S Barstow St. where Pabich hopes visitors will experience an enjoyable and memorable time in downtown Eau Claire.

In starting Raggedy Man, Pabich’s vision is to have a comfortable and welcoming atmosphere,

“The biggest goal was making sure that the store is a comfortable and welcoming space, I don’t want anyone to ever come here and feel out of place,” Pabich said.

Pabich grew up in Eau Claire and attended the University of Minnesota’s College of Design. He graduated with a graphic design major and mass communications in advertising minor. With this, he continued his passion for graphic design as a senior graphic designer for four and a half years at Pesi Continuing Education. While Pabich appreciated the work he did at Pesi, an office job was not for him. Pabich gave himself around a year to gather the ideas for his shop and decide where he would start his business. With the world at his feet, he decided to stick to his roots and start his shop right here in Eau Claire as the city expanded.

“Downtown was totally dead, I have zero memories of being down here,” Pabich said.

With this in mind. Pabich aims to change how the city is viewed.

Pabich grew up in Eau Claire and explained that the city was not as developed as it is today. “We didn’t have as many cultural moments. Music in the Park did not exist. We didn’t have the Farmers Market. Phoenix Park was a dirt mound,” Pabich said.

As the community continues to grow, Pabich knows this is where he was meant to be. When starting his business, Pabich found resources within Eau Claire to help entrepreneurs. He got support through the Small Business Development Center (SBDC) which gives entrepreneurs a roadmap to start their business.

Pabich enjoys the small business community that Eau Claire has, which is a key factor in having a successful business in his eyes. Pabich’s goal is to create balance for the downtown shopping in Eau Claire. He is aware of other items that local shops sell and aims to have variety. While Pabich fully supports buying local and supporting local makers, his store does not carry local goods for the purpose of adding assortment. He attends a market in Atlanta, Georgia, where he finds items from larger companies.

Pabich says having this variety helps not only his store thrive, but his fellow shop owners. When Pabich thinks of his business, his community is also in mind, including helping out other businesses. If his store does not have an item that a customer is looking for, Pabich is more than happy to send the customer to a different store, as he hopes they do the same for him.

“If we can support each other, we will be more successful as individuals,” Pabich said.

Pabich’s love for the small business community also stretches to his everyday customers. As he interacts with every person that walks into his store, he intends to make a lasting positive impression on them. He shows genuine interest in his guest’s lives and is enthusiastic about helping them find their next gift or decoration items. As he helps a regular with her re-decorating plans. Michelle Burgess, a loyal customer of Raggedy Man expresses her appreciation.

“Whenever I feel like I need to update something in my house, Raggedy Man is my first stop because it is very unique, my style and fun,” Burgess said.

Pabich has a variety of supporters when it comes to his business. His mother, Denise Pabich, has always seen him as a creative person.

“He can look at something plain and broken and turn it into something amazing,” Denise said.

Denise sees Pabich living his dream, which is how his business will continue to be successful. “He faces challenges straight on and sees people for who they are. He makes good connections and uses negative feedback to his advantage, to make changes to his store,” Denise said.

Pabich ensures that he builds up other local businesses, while having items that are meet the desires of his customers, However, this journey has just begun for Pabich. In the future he hopes to employ another individual for his store. Expanding is also in the picture as his business continues to grow.