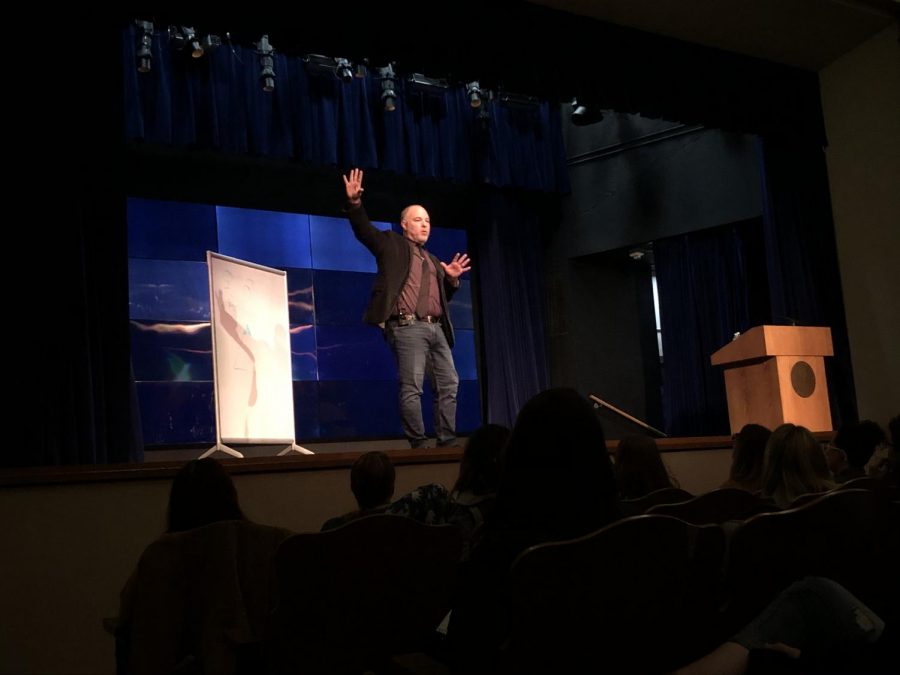 Hosted by the Forum series in Schofield Auditorium, Katz asserted that passive language used in discussions of gender violence rhetorically erases men from the problem.

“What’s missing from the term Violence Against Women?” Katz asked the audience of students, alumni, and professors, before pausing for an audience answer.

The presentation covered Katz life work in developing and teaching gender violence prevention and education programing, used by the U.S. military and other international organizations.

Katz said because of cultural reinforcement, toxic masculinity has deep seeded roots in men’s lives, and those roots can’t be ignored when looking at men’s actions, both violent and non-violent.

According to a 2018 University of Wisconsin System report, the number of UW System sexual assaults reported from 2009 to 2018 has risen significantly. Additionally, the Center for Disease Control reported men in Wisconsin die by suicide at higher rates than the national male average.

While Katz advocated for consideration of toxic cultural norms when looking at masculine behavioral patterns, he clarified that accountability is still necessary.

“I feel responsible, as a man, to speak out about sexism and misogyny in a world where there is incredible brutality engaged in by men,” Katz said. “It’s not about guilt. It’s about responsibility.”

Following the presentation, Katz welcomed questions from the audience.

Evon Anderson, a fifth year Women, Gender, and Sexuality Studies major, was one of the first in line for the audience microphone.

“On our campus, we’ve been dealing with a number of sexist and misogynistic issues, especially within the last month, and it’s primarily an issue because of the lack of women in positions of administration. There is training, some required and some not, so my question is how do you suggest we get through to older, more traditional, or hard-headed faculty so that they can both learn but also no longer enable misogynistic behavior?” Anderson asked, followed by a round of applause from the audience.

Katz presentation comes less than a month after the resignation of Albert Colom, the Vice Chancellor of Enrollment Management at UW-Eau Claire. A formal complaint alleged that Colom perpetrated gender discrimination at the University. Before the investigation on the complaint was completed, Colom announced his resignation.

“What would I do if given the power to do whatever is necessary to change the culture on a college campus?” Katz asked in response to Anderson. “The first thing I would do is find all the senior male administrators on campus and have a training for them,” Katz said, and was met with snaps from the audience.

“On a campus that has a student population made up of 60 percent women, hearing about how to deconstruct toxic masculinities domination over women is so important,” Neu said. “After what happened with the Vice Chancellor, it should be obvious that we need more women represented in the administration, in those big positions of power.”