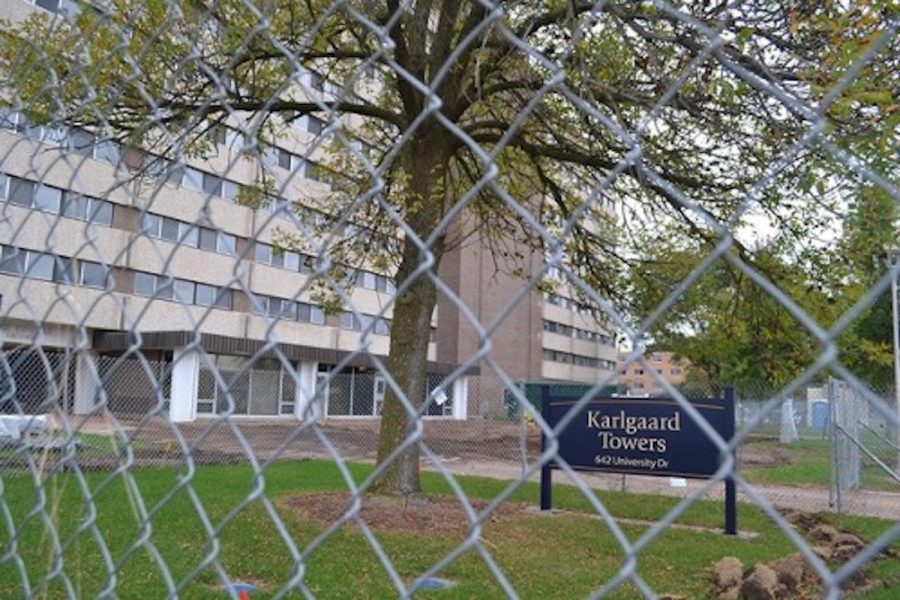 Products purchased from the Bureau of Correctional Enterprises include several custom signs that can be seen around campus. Photo courtesy of The Spectator.

Though slavery was officially abolished in 1865, what critics from publications like The Guardian have deemed as “modern slavery” still exists in Wisconsin today – primarily through the Bureau of Correctional Enterprises

In accordance with Wisconsin law, all state agencies and UW System schools are required to purchase office furniture through the BCE.

The BCE is a part of Wisconsin’s Department of Corrections. This program is designed to offer Wisconsin inmates the opportunity to “work, learn and earn” while incarcerated, said Ray Wesley, director of the BCE.

However, the wages earned by BCE workers equate to pocket change. A loophole in the 13th Amendment is to blame.

“Neither slavery nor involuntary servitude, except as punishment for a crime whereof the party shall have been duly convicted, shall exist in the United States,” the amendment reads.

In other words, incarcerated people are not protected by the 13th Amendment. Scholars, activists and prisoners have linked this exception to the rise of a prison system that incarcerates black people at five times the rate of white people and profits off their unpaid or underpaid labor, according to History.com.

This exemption allows the BCE to pay workers far below the minimum wage for their labor.

“At a federal level,” A The Badger Herald editorial reported, “courts have excluded prisoners from protection under the Fair Labor Standards Act.”

The FLSA is a federal law that establishes minimum wage, overtime pay eligibility and other standards relating to workers in the private sector and in federal, state and local governments.

“In the post-Reconstruction South, the exemption led to the return of slavery ‘by another name’ as Black men and women were arbitrarily convicted, then leased as hired work crews,” The Badger Herald editorial said. “But the prison industry in Wisconsin has received relatively little attention, despite its reliance on the unpaid and underpaid labor of a racially skewed prison population.”

Rep. Jodi Emerson, of the Wisconsin State Assembly, said she does not believe “modern slavery” is a fair label when incarcerated workers are doing the work voluntarily.

Emerson said that employing people while incarcerated can have some very good, positive impacts on the workers and on business. She said that not all prison labor programs should be “painted with the same brush,” as certain programs can help reduce recidivism and promote success.

However, Emerson said, there are several questions to consider while looking at prison labor: Are the inmates forced to work or are they given the option? Does this fit a need in the community? Are they paid a fair wage? Is this a job that can be done safely considering the needs of security issues in a prison?

“Some programs in prison are not ethical because (workers) are paid pennies per hour and the only one who truly benefits is the company, because they did get almost-free labor,” Emerson said. “I do have a problem with those types of prison labor and I would not support programs like this in our state.”

UW-Eau Claire purchased over $520,000 of products manufactured by the BCE during the 2019 fiscal year.

Mike Rindo, assistant chancellor for facilities and university relations, and Melissa Allen, director of purchasing, both declined to comment when contacted.

According to Wesley, purchase invoices from UW-Eau Claire can be traced as far back as June 17, 1993. However, Wesley said he is confident the BCE and UW-Eau Claire did business before then.

There are four components of the BCE: Badger State Industries, Correctional Farms, Badger State Logistics and the Transition Program.

Some of the BCE products that can be found around campus include tables, room number signs, restroom signs, fire exit signs and the dorm signs for David Karlgaard and Marilyn Karlgaard Towers.

“Our Custom Signs supervisor recalled an interpretive sign designed and made by workers on that team that was installed between Centennial and Schofield halls,” Wesley said. “He said it tells part of the UW-Eau Claire campus history.”

While some activists call programs like the BCE “exploitative,” Wesley said the program can benefit workers in a variety of ways.

According to Wesley, workers are trained in a variety of technical skills. Working while incarcerated also improves the likelihood of employment following release as they prepare resumes, learn how apply for jobs or practice for interviews, he said.

Wesley also said workers’ earnings can be used to make court ordered payments of restitution to victims of their crimes and child support or they can go into a release account, which may add stability upon the worker’s release and reduce the likelihood of future criminal behavior.

Some activists, however, note that prices for simple goods in prison – hygiene products or phone calls – oftentimes do not accommodate for the low wages. A call to family often can cost the equivalent of a day’s work, reported Inside Higher Ed.

The BCE’s Research and Policy Unit completed a January 2018 analysis of the rate at which former BCE workers are re-incarcerated with the DOC, Wesley said.

“That analysis showed 69 percent of former BCE workers had not come back into DOC custody three years after they returned to their families and communities,” Wesley said. “While BCE continues helping workers improve their success after release, I think about BCE and the former workers on our teams having a 690 batting average and how exciting that is.  The success rate for statistically similar persons in our care who did not work for BCE was 66 percent.”

One former inmate, referred to as Kyle in an article by The Cap Times, supported these sentiments.

Kyle worked at a BCE dairy farm in Waupun, Wisconsin prior to his release.

“I kind of see that I’ve opened up and I do have some leadership qualities about me,” Kyle told The Cap Times. “I can pretty much adjust to a problem, I don’t get too overwhelmed or if I need help, I ask for help.”