For the love of forensics: How Krisany Blount kept a high school club alive during a pandemic 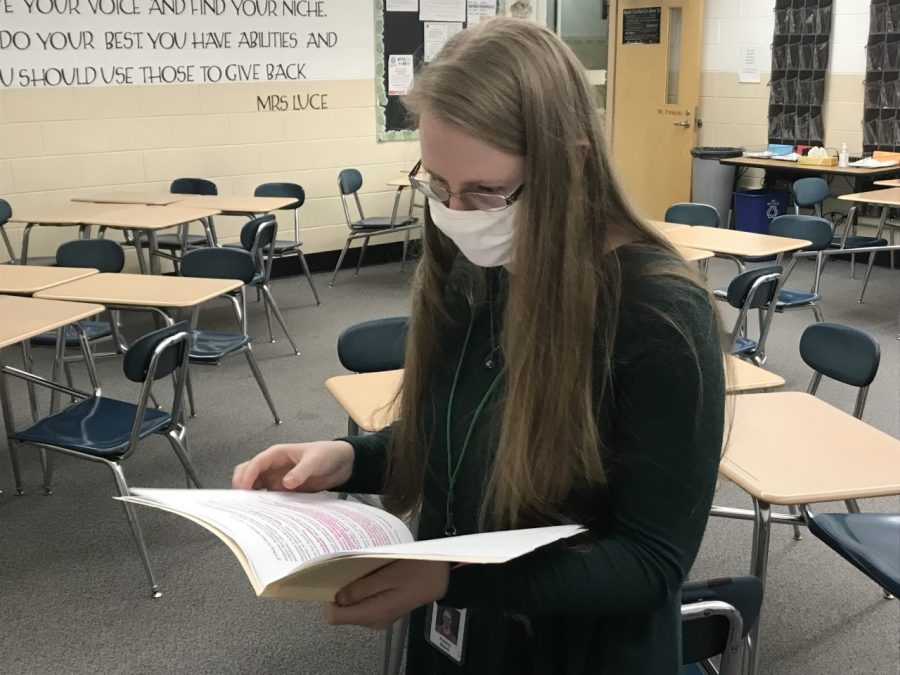 Krisany Blount reviews a poetry selection of one of her students to make sure it is tournament ready. ©2021 Max Haslow

Krisany Blount fell in love with forensics, the art of competitive public speaking, while she was still attending North High School in Eau Claire, Wis. After graduation, she stayed with the school’s forensics team as an assistant coach to stay close to the group she considered a second family. However, taking over as the team’s head coach would be a daunting new challenge, especially with the threat of a global pandemic on the horizon.

My name is Krisany Blount, and I am one of the coaches for the North High School Forensics Team.

I knew that taking on this position was going to give me intense amounts of anxiety and it was going to be a really difficult experience for me. The coaching part of it, I had down. Wasn’t worried about it. It was everything else, managing all of the kids at a more intense level, making sure that paperwork was getting filed, organizing transportation, managing the budget and all that stuff I had never done before and had no frame of reference for. That was the part that was really stressing me out. I had a really stressful year focusing solely around all that. But I got through it, and had fortunately Scott Smith to advise me, Scott Peterson, one of our other coaches was also a great help, and then Cole Pankratz. He was also a big help too. Without those people, I really would not have gotten through that year in any sort of successful way.

So things were going pretty much fine, and then COVID hits. All of a sudden, we had no idea what was going on at all for a long period of time, which was incredibly stressful again. But we figured that out, communicated with the kids, got everything taken care of. We did get to finish our final state tournament that year, which was great. We had almost the entire team participate, there were just a couple who didn’t for various reasons, so it was really awesome that that worked out so well.

Then the following year, so my second year as head coach. If I thought the first year was a lot, oh boy, the second one. This past year was a really frustrating one for a number of reasons. So that year was completely virtual. We did not meet in person at all at any point. For me, it was just an absolutely insane amount of computer time. There were some days where it literally felt like I had done nothing but look at my computer because I was still in school at the time. Most of my classes were still online and all of my homework had to be done at my computer, and then I was on my computer for forensics practice after all that. I was literally spending almost 12 plus hours a day on my computer, which was exhausting.

We talked a lot amongst us coaches about how to keep the kids involved and engaged because we were showing up and at the beginning of the season, we had a normal number of students showing up, the same amount that we would see typically when we were doing in-person practice. Very quickly, that number started to drop off. You can’t blame the students because they were full-time high school students, and all their classes were online two days a week. So, I absolutely do not blame them for not wanting to show up for another thing that’s virtual, even if it is just once a week for 30 minutes. I get that. But it was still really frustrating for us because we were there waiting for kids to come in, and kids just weren’t coming in, so we would see four or five kids a week by the time we got to the competition season.

So that year was a lot about learning to manage expectations because there’s not a whole lot you can do when the kids are giving you everything they can, and they are just so wiped out and so exhausted emotionally and otherwise just because of everything else that’s going on. If they’re giving you what they can, you can’t ask for anymore, so you have to learn to work with what they can give you and adjust what your expectations for them are going to be because of that. There was a lot of frustration all around, and there wasn’t really a whole lot that we could do about it.

Despite all of that, we still had a pretty decent season. The one benefit of all the frustration is that when we had those kids who really did well, it felt a lot better than it normally does. They’re no longer struggling, it’s all clicking and coming together. The judges are seeing that and it’s all being reflected in their scores. Those are the moments, even if they don’t make it into finals. Those are the moments that feel so good, and it felt even better a lot of times last year. I think it’s because of all that frustration we were dealing with, and all the difficulties that the coaches were up against and the students were up against. So it wasn’t all bad.

I’m glad that we’re now back in person even if things are still kind of wonky. I’m hopeful that this year will be a better year than last year was, and I’m also hopeful that things will continue to improve and that by next year, we will be completely back to normal and not just pretending to be.

Krisany Blount and the rest of the North High School Forensics Team look forward to competing this year in pursuit of a state tournament championship, no matter what obstacles get in their way.