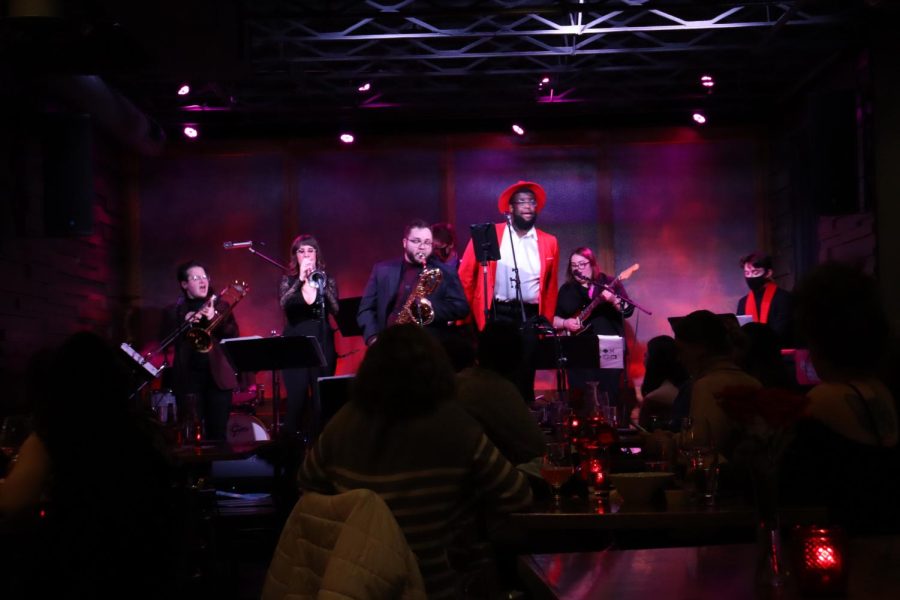 Uncommon Denominator performing a show at the Lakely in February 2022.

COVID-19 impacted the local Eau Claire music scene heavily with the shuttering of several venues that artists relied on to make a living.

Private grants and state benefits helped some artists make it through the pandemic. However, many still feel the economic strain today. Venues are opening back up allowing artists to perform and support themselves again today.

According to Nick Anderson, the lead singer of the local alternative rock band Nick Anderson and the Skinny Lovers, he made the jump to being a full-time musician in 2019.

“Our band was doing real well,” Nick Anderson said. “We were getting festivals, the band was getting very successful and I realized I had to do it full-time to get larger shows and take the band to the next level.”

When the COVID-19 pandemic arrived in March of 2020, Nick Anderson said that after a month, his band started performing virtual shows. After four months, living on his savings, state and federal grants and private grants helped him survive without the income of live performances.

According to Nick Anderson, one of the grants that helped him immensely were the series of grants released by MusiCares, the Recording Academy’s nonprofit organization. Additionally, the Wisconsin Department of Revenue Wisconsin Tomorrow Small Business Recovery Grant helped him due to being open to independent contractors.

Nicole Johnson, the trumpet player for Uncommon Denominator, said that COVID-19 was also a chance for their band to work on their individual skills and also arrange over 150 songs to perform when venues finally opened up again.

According to Johnson, after a 10-month break, the group came back stronger than ever.

“We all of a sudden clicked right back in as if nothing had ever happened, so that was really cool,” Johnson said. “We had new members amongst us too, some people graduated, some people left, some people were here for the summer and that’s it. It was kind of a crazy time, but I think we came back 10 times stronger in a way.”

DeBlaeys said that support from the other band members played a huge part in their success.

“The fact that we came out stronger, it was super emblematic of the power of this collective of people, but also our ability to help each other through hard times,” DeBlaeys said.

Another form of aid for the local music industry has been the Shuttered Venues Operators Grant.

The Shuttered Venues Operators Grant was developed as a respite for businesses that primarily rely on in-person visitors. According to the U.S. Small Business Administration, the Confluence Council, the group that oversees the Pablo Center at the Confluence, received $1,616,253.5.

According to Jason Anderson, executive director of the Pablo, the money received from the SVOG and state grants, donations and other federal grants have been the biggest factor in keeping the Pablo open.

“This facility, we have a pretty hefty carrying cost,” Jason Anderson said. “It costs us just under a quarter million dollars each month that the building’s on.”

According to Jason Anderson, that month-to-month cost did not include paying the salaries of 22 full-time employees.

One of the first programs that the Pablo was able to utilize was the Wisconsin Department of Workforce Development Work-Share Program.

According to the Wisconsin DWD, the Work-Share Program was designed to allow employers to lessen employee hours rather than commit to layoffs. For the employees, it is designed to award prorated unemployment benefits for the hours lost.

According to Jason Anderson, this program, in addition to the U.S. SBA Paycheck Protection Program loans, helped keep all 22 full-time employees retained since the beginning of COVID-19.

For the costs of the building though, Jason Anderson said that a combination of the Wisconsin Department of Administration Cultural Organization Grant and Live Music and Entertainment Venue Grant programs helped the Pablo receive approximately half a million dollars in funds.

These state level grants, along with the SVOG, primarily went towards funding the upkeep of the Pablo building, according to Jason Anderson.

The final piece in keeping the Pablo funded were private donations. The Bridge Campaign, meant to help offset operational costs, was announced on July 31, 2020.

According to Jason Anderson, private donations and state level grants accounted for approximately a million dollars in relief.

Looking forward though, Jason Anderson said that with the Pablo being fully open this summer, he is excited for what comes next.

“Coming out of the pandemic, there’s now a sense of, we want to get back together in large groups,” Jason Anderson said. “We want to be entertained and the Pablo Center is the place to do that. So I have sensed at least over the last month thus far, there’s a really general sense of renewal and excitement.”

According to Johnson, Uncommon Denominator has a huge summer planned with several shows.

“We have a lot of bookings coming up,” Johnson said. “So is this kind of a send off to a lot of stuff leading all the way into the summer too. So we’re super pumped, we have lots of new tunes prepped.”

For Nick Anderson though, COVID-19 has proved to be an example for how “vital” his band is for the local community.

“Our mission is to create an escape for people and heal people through our music,” Anderson said. “With people risking their health to see our shows, it’s only shown me that the mission is the most important thing.”

Adams can be reached at [email protected].